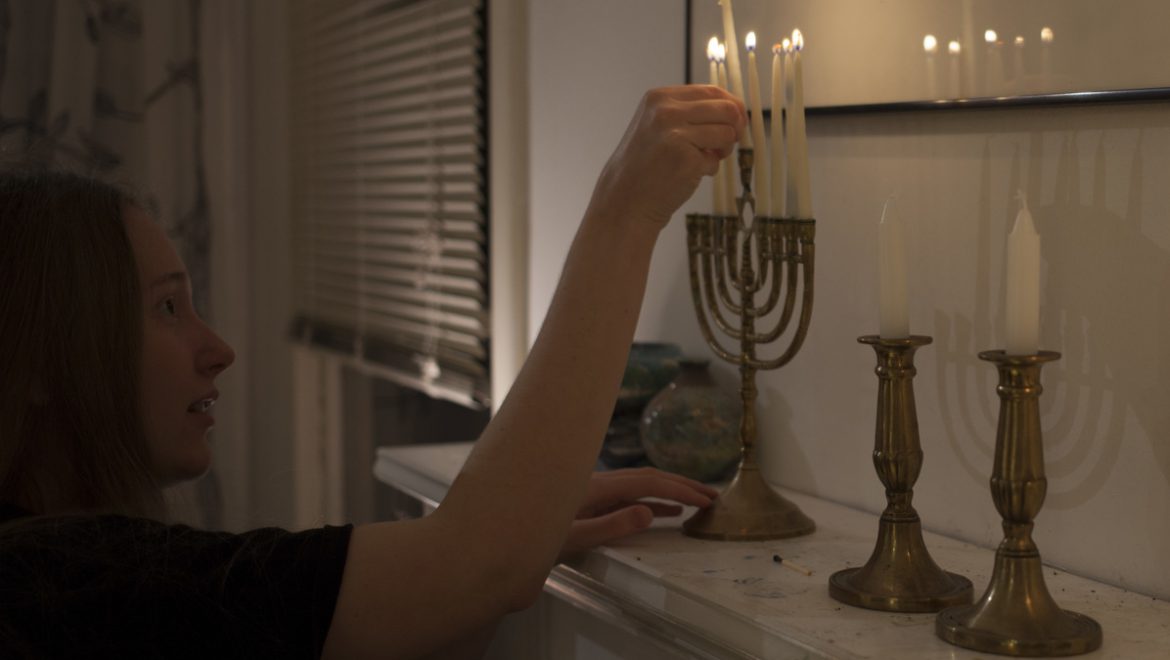 This introductory article from the Society for Humanistic Judaism explains the themes and customs of Hannukah according to the Humanistic community. The community focuses on the values of human action, courage, dignity, freedom, justice, Jewish identity, choice, strength, and ingenuity, as demonstrated through the Hannukah story, as well as the symbolism of fire and candles. Founded in 1963 by Rabbi Sherwin T. Wine, Humanistic Judaism enables people of any background to cherish Jewish history, culture, and ethics without worshipping a supernatural being.

Hanukka is the eight-day Jewish winter celebration. For Humanistic Jews, Hanukka is a celebration of human courage. The flickering Hanukka lights are a reminder of the struggle, courage, and fragile triumphs of the Jewish people. The flames are a link to the past and a tribute to the dignity of Jews everywhere.

Hanukka, a Hebrew word meaning “dedication,” is said to refer to the re-dedication of the Temple of Jerusalem by Judah Maccabee and his followers in 161 B.C.E. The basis of Hanukka is the story of a Maccabean victory embellished by Talmudic legend.

This legend tells us that a small band of Jews led by Judah Maccabee and his family rebelled when the Greek King Antiochus Epiphanes sought to impose Greek culture and religion upon his Syrian empire, which included Judea. Following their recapture of Jerusalem, the victorious Jews rededicated the Temple in Jerusalem and decreed an annual celebration of Jewish independence. Some six hundred years after the Maccabean victory, the rabbis, seeking to claim Hanukka as their own, added the legend of the single flask of oil that miraculously burned for eight days.

The story of the Maccabees is a story of human courage, integrity, and hope. The success of their revolution is rooted in the people’s desire for religious, political, and economic freedom– their desire to choose their future for themselves. This they accomplished, not by pious pleas or tearful entreaties, but by decisive action, expert planning, and sheer guts. The values of the Maccabean revolution are as important today as they were centuries ago. We, too, must take the future into our own hands. We must choose for ourselves how we shall live, and we must act on that choice courageously without loss of integrity or hope. Hanukka is a valuable holiday for Humanistic Jews, affirming the wonder of nature, celebrating the courage of authentic heroes, and articulating the values we must have if heroism, humanity, and the natural order are to survive.

Most celebrations reflect the ancient and traditional celebration of the holiday and include new meanings for our own day. Families often retell the ancient stories, share the rich symbols, and connect these with modern concerns and issues.

For Humanistic Jews, Hanukka is a tribute to human power and courage. Judah Maccabee was a man who was willing to fight for what he believed, although like his enemy, Antiochus Epiphanes, he was a religious zealot who denied freedom of worship to those who opposed him. Despite this, his example of bravery and authenticity motivates us to seize control of our lives and take our future into our own hands. We choose how we shall live, seeking to behave courageously and to preserve our integrity. For Humanistic Jews, Hanukka is an endorsement of human strength and ingenuity, of hope and bravery.

Humanistic Jews celebrate Hanukka as a reminder that human beings can use their abilities to enhance the quality of life. Hanukka celebrations are festive occasions, marked by the lighting of the candles of the hanukkia. Families and communities gather for the holiday meal, featuring potato latkes. Hanukka songs are sung and dreidel games are played. Often families bring their own hanukkia to light at the community celebration. The lights of the hanukkia serve as a connection to our past, as a link to other Jews, and as a reminder of the fragility of life. We kindle the lights for our values: action, courage, human dignity, freedom, justice, Jewish identity, choice, strength, ingenuity.

As we humans move through time and space, we assign different roles to the act of lighting candles. Sometimes candles serve the purpose of signaling the onset of passage or holy days and special occasions. At other times we light candles to communicate our solidarity with people from whom we are separated by gaps in time or space or other barriers. The candle-lit windows of Poles after December 13, 1981, provide dramatic example of this habit. Closer to home, we have the lighting of Yahrzeit candles in memory of deceased beloved ones. At still other times, we light candles to brighten dark corners and improve vision and understanding. But no matter what the religion or culture, we have shown an attachment to “burning lights,” as Marc Chagall’s wife Bella called them. Perhaps one reason for the universal appeal of candle lights is that candles are a reflection of the human spirit, Jewish and otherwise.

At its best and most glorious, the flame of a candle points high up, striving to move beyond its immediate reach. An active, burning candle emits a glowing, golden haze around it. The flame of a candle communicates strength, vitality, triumph, vision, and warmth.

In the course of its life span, the flame of a candle is dynamic, not static. It surges up and falls down. It sways back and forth. It expands and contracts. The flame of a candle can brighten dark spots and expand our vision. That same flame can narrow our focus and blind us if we fail to note other sources of light in our environment.

The flame of most candles has two parts. The upper, outer layer is brilliant gold. The inner, lower layer is blue. This inner, lower layer is like a shadow box, inviting us to explore the many images it suggests. These images are both creative and destructive. Shadows suggest negative visions of Jewish synagogues and homes set afire during pogroms and wars; of books, both secular and religious, burned during cultural purges; of civilian and soldier faces scarred by flames of wartime bombs. Flickers of candles also conjure images of pleasant memories of the past. The latter includes flames that heated savory meals of yesteryear and provided light to dark households and passageways, enabling people to better control their world and communicate with each other. Like the human spirit, burning lights are capable of signaling both creativity and destruction.

And lastly, candles have a finite existence. They demonstrate the fragile nature of life on this earth. Candles begin to glow while in a solid state, but eventually burn down to nothingness. Curiously, from the first moment of burning, candles seem to shed tears of awareness as the wax drips down their sides!

In lighting candles, we seek connection with the past, with each other, and with ourselves. Burning lights gives us a sense of our strength, vision, and dynamism. They also reflect the complexity of our experience on earth and the delicacy of our co-existence, peaceful or otherwise, here and now.

May the lighting of candles always remind us of the dynamic, multi-faceted, and fragile nature of our lives. And may the light of candles direct us to seek each other in peace.

As we light our Hanukka candles, let us say:

“The Eight Lights of Hanukka,” a contemporary reading of the symbolism behind each candle: