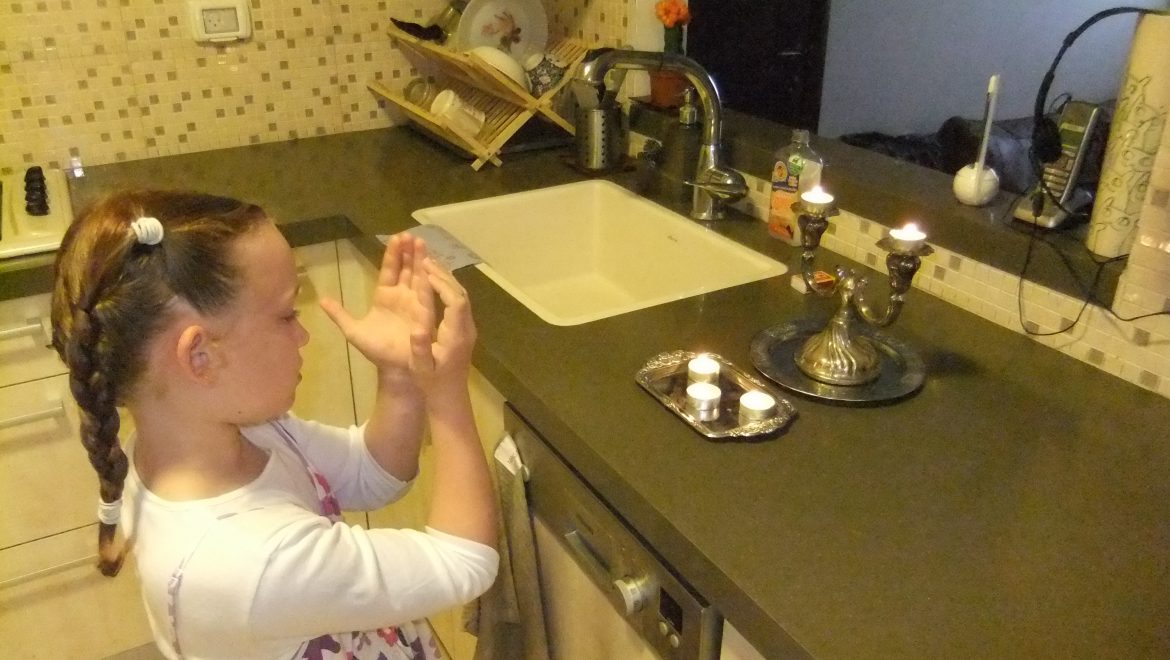 This article discusses the strong feminine aspect of the candle lighting ritual, including how various traditions which have been handed down from generation to generation through family matriarchs have gained halachic status. Among other practices, the article explores the ancient sources for lighting the candles and spreading one’s hands prior to reciting the blessing. This article will be of particular interest to those interested in the development of the halachic system, as well as the role of women in Judaism. The author, Aliza Lavie, is a Member of Knesset (Israeli Parliament) and academic. She has written many works, including “A Jewish Woman’s Prayer Book,” which seeks to revive the prayers of learned scholars, leaders, mothers and wives.

A Woman Before God

Shabbat arrives, bringing limitations and boundaries – but also the tranquility of acceptance, pleasure, and the additional soul.

Precious moments of supplication, embrace of loved ones both near and far, hope, and unity. A connection to the chain of generations, to mother, grandmother, and women in the past. If Shabbat is meant to illuminate the soul, then the lighting of Shabbat candles is the flame; a glimmering of the Hidden Light that awaits in the World to Come. I have always felt that way. In recent years, during my research of women’s prayers, I found verbal and textual expressions of the unique power of the moments of candle-lighting. A woman’s moments before God. Moments of supplication, of concern and pleading for individuals, and of prayer for all of Israel. I realized that the special quality of this time was well known. It is a gazing into the Hidden Light; an ancient feminine wisdom that transcends boundaries of time, space and language.

Since ancient times, women were responsible for the lighting of Shabbat lamps. It is they who perform the ceremony marking the arrival of Shabbat into the home, with no need for communal confirmation or the presence of anyone else. There is just the moment, the candles, and the women – the women’s moment.

The candle-lighting ceremony passes from generation to generation, from mother to daughter, from grandmother to granddaughter, and hence variations have arisen concerning the manner of lighting and the accompanying prayers. A question of halakha (normative religious practice) going back hundreds of years yields insight into the feminine Jewish world:

Rabbeinu Tam, grandson of Rashi, was among the most prominent halakhic authorities in 12th century
France. In addressing the question of which aspect of the candle-lighting – the action itself, or the blessing recited over it – represents the essential fulfillment of the commandment, he consulted the women of his family as to their custom in this area. With no hesitation and quite naturally, he relies on the tradition handed over by women to women, using their normative practice as the basis for his halakhic conclusion that the blessing is in fact the crux of the commandment.

This episode proves that it was not the rabbinical authorities who taught women how to go about fulfilling the commandment of lighting Shabbat candles. Rather, the women themselves received and passed on their women’s tradition, and this body of knowledge was considered a reliable basis for religious scholarship. Admittedly, not all halakhic authorities accepted the candle-lighting as the definitive moment of the commencement of Shabbat, but women viewed this ceremony as an unequivocal sign of the acceptance of Shabbat, and this perception was accepted as normative practice. Thus the sister of Rabbeinu Tam, Rabbanit Hanna, instructed that the blessing should be recited only after lighting the candles – “For otherwise how could one propose to light the Shabbat candles if she has already accepted Shabbat (through recital of the blessing)?”

In Israel, the nuances in this area – as in many others – are displayed in all their contrasts in the encounter among different ethnic communities. On one hand, the usual procedure in religious practice is to recite the blessing and then perform the commandment. Hence, it would seem that here too, the blessing should precede the lighting of the candles. On the other hand, if the utterance of the blessing itself represents the arrival and acceptance of Shabbat, with all its special laws and limitations, then how is it possible to light candles afterwards?

Rabbi Shalom Mashash, a leading Moroccan sage of the 20th century, answered this dilemma with the teaching, “Do not forsake the teaching of your mother” (Prov. 1:8). He comments as follows on the prevailing custom of Jewish women from Morocco: “The Moroccan custom was to recite the blessing over Shabbat candles after lighting them. The reason for this is simple: that after the blessing, one has already accepted Shabbat – so how can one then light candles… When the Moroccans came here [to Israel] they did not know what to do [since some communities in Israel follow the opposite procedure], and when they came to ask me I told them, ‘Do not forsake your mother’s teaching’, and that they should continue to follow their custom, because tradition is a great foundation that can be relied upon.”

The ancient custom of spreading the hands, which was almost lost, serves to illustrate the power of the wisdom of women’s custom. What do the hands do? Are they held over the lit candles while the blessing is recited, or are they placed over closed eyes? Once again, the answer lies in the feminine tradition passed down over the generations. Many women, from many different Jewish ethnic communities, use their hands for covering: some cover their eyes, others cover the light of the candles, and some pass their hands over the candles three times before covering their eyes. In each case, women continue the tradition passed down to them: “That’s what my mother does, and that’s what my grandmother used to do.”

According to Prof. Ta-Shma, the custom of covering the eyes has its source in the ancient tradition of offering personal, private prayers after lighting candles. The testimony of Rabbi Avraham son of Rabbi Azriel, in the 13th century, describes women offering personal prayers for the members of their households, for themselves and for all of the Jewish people after lighting candles. Through this ceremony of personal prayer, Prof. Ta-Shma explains, women preserve the ancient tradition of spreading hands which was practiced during prayer. The practice was annulled after the Destruction of the Temple.

This shows that women have preserved a custom which disappeared from men’s prayer. There is no trace left of it in those instances where the candle-lighting needs to be performed by men instead of their wives, or by men who light candles wherever they are alone. Thus, for example, a letter found in the Cairo Geniza, written by a merchant far from home, offers the following testimony:

“It is most difficult for me every Shabbat eve, when I light the candle and place it upon the table which God provides for me, and then I think about you. Only God knows what I endure.”